Amazing tomato-potato plant hybrid was created by Thompson and Morgan, a British horticultural firm, without using any genetic modification.
“It has been very difficult to achieve because the tomato stem and the potato stem have to be the same thickness for the graft to work… It is a very highly skilled operation. We have seen similar products. However, on closer inspection the potato is planted in a pot with a tomato planted in the same pot – our plant is one plant and produces no potato foliage.” said Paul Hansord, director of the firm. 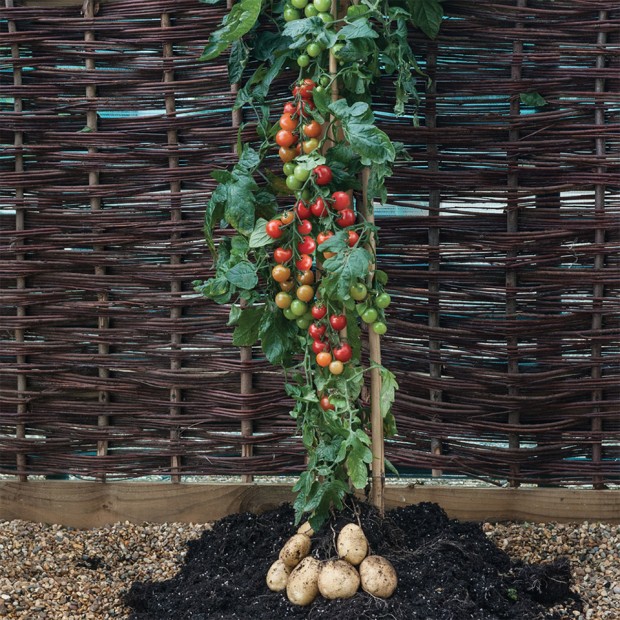 Science experiments you can do with liquid at home
3D printer by university students that prints gardens of individual style
Slow motion video of vinyl record's needle sliding over the record at 1/400 speed under electron mic...
New design of mechanical keyboard inspired by typewriter
Timelapse from Planet Earth II captures incredible scene as fungi blooms at night
The newly discovered frog in Costa Rica looks like Kermit The Frog
The World's Oldest Tree Was Discovered In Sweden As Old As 9,500 Years Old
Perhaps the most beautiful insect ? The Orchid Mantis can disguise itself as a vivid flower to lure ...
Eye-catching roadster concept by BMW - Vision ConnectedDrive
Marine photographer captured sea creatures in extremely harsh conditions near the Arctic Circle
BRABUS iBusiness 3D - High tech office and luxurious entertainment lounge as well
Phone gadget with thermal printing technology prints instant photos like a Polaroid
3D printed spherical object
Magic cube that can jump up and balance on its corner
Innovative pets communication system
agricultureamazing plantbiologyplant hybrid